A commentary on the actions of Trump’s first week in office. 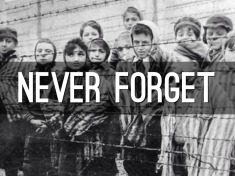 January 27th was International Holocaust Remembrance Day.  This is a day in which the victims of the Holocaust are to be remembered. The Holocaust was a genocide (the methodical killing of a large group of people) that resulted in the death of an estimated 6 million Jewish people, 200,000 Romani people, 250,000 mentally and physically disabled people, and 9,000 homosexual men by the Nazi regime during the 1930s and 1940s. As a social studies teacher, I taught my students about this event and emphasized the importance of remembering such events so that such atrocities would never happen again. Now I have to wonder if history is about to repeat itself.

My New Year’s resolution this year was to watch less news which I’ve been successfully doing for the most part, but on January 27th, everyone that I met or connected with on social media was talking about Trump’s travel ban.  Mr. Trump signed an executive order implementing a travel ban of people from seven majority Muslim countries for 90-days. The seven countries are Iran, Iraq, Somalia, Syria, Sudan, Libya and Yemen. This order also suspends all refugee admissions for 120 days with “case-by-case” exceptions and suspends entry of Syrian refugees indefinitely. This caused confusion as permanent residents and green card holders didn’t know if they could enter the country due to conflicting advice sent to airlines by the White House. It also sparked outrage in the form of protests across the United States (see Protests Held). The President claims he is “Protecting the nation from foreign terrorist entry into the United States”.

According to the Huffington Post, from 1975 to 2015, foreign nationals from Iran, Iraq, Libya, Somalia, Sudan, Syria and Yemen killed exactly zero Americans on U.S. soil. The article sites an analysis of terror attacks by the Cato Institute.  In 2016 alone, 188 people were killed on U.S. soil in mass shootings not involving Muslim American extremists, the report says. Meanwhile, there have been 230,000 murders in the U.S. since 9/11. These are Americans shooting Americans.

The White House stated “Numerous foreign-born individuals have been convicted or implicated in terrorism-related crimes since September 11, 2001,” when it issued the order. What is interesting to note is on Sept. 11, 2001, 19 militants hijacked four commercial airlines to carry out terrorist attacks on the U.S. that killed 2,996 people and wounded more than 6,000 others. The 19 men were associated with al-Qaeda, led by Osama bin Laden. Of the 19 hijackers, 15 were from Saudi Arabia, two from the United Arab Emirates, one from Egypt and one from Lebanon. None of these countries are on the ban list. People from those three countries are still welcome to apply for U.S. visas and travel permits. This made no sense in my mind. The question is why? According to the Daily News,  Trump’s business empire holds multi-million dollar licensing and development deals in all of those countries raising alarming questions over what actually went into the decision process behind the executive order.

On Facebook, a video went viral of an Irish Senator, Aodhán Riordáin, reacting to the victory of Donald Trump. I encourage you to have a look. (see Trump is a Fascist). What struck me is that the senator referred to Trump as a fascist. During the U. S. Primaries last year my son sent a text me and referred to candidate Trump as a “modern day Hitler”. I’m now beginning to wonder if there might be some truth in his assessment of the man. There are several definitions of fascism but I like the definition on businessdictionary.com. It defines fascism as a

“Political ideology that imposes strict social and economic measures as a method of empowering the government and stripping citizens of rights. This authoritative system of government is usually headed by an absolute dictator who keeps citizens suppressed via acts of violence and strict laws that govern the people. The most noted form of fascism was implemented under Benito Mussolini and Adolf Hitler, who both stripped citizens of their rights and maintained strict regimes that resulted in the deaths of thousands of humans. Some of the defining characteristics of fascism are: (1) racism, (2) militarism, (3) dictatorship, and (4) destructive nationalistic policies”.

Now if we look at the entire definition, we cannot say with conviction that the Trump administration is a fascist government. The key part of the definition that would dispute this is “headed by an absolute dictator who keeps citizens suppressed via acts of violence.” Mr. Trump was elected democratically, has not carried out acts of violence to my knowledge and is not an absolute (as in his word is final) dictator although signing executive orders is sort of dictatorial since it hasn’t been approved by the Senate or House of Representatives.

Are citizens being stripped of their rights?  The January 21 Women’s March was held because woman, believed women’s rights, LGBTQ rights, racial equality, freedom of religion, and workers’ rights were all threatened under a Trump presidency.  The Independent reports that Donald Trump’s travel ban has been denounced by the UN as “mean-spirited” and illegal under international human rights law. Discrimination on nationality alone is forbidden under human rights law. Essentially, this ban is removing human rights on the basis of nationality and religion. There is little doubt that citizen’s rights are being infringed upon. That smacks of fascism to me.

Racism:  According to dictionary.com, a definition of racism is “intolerance of another race”.  The travel ban targets Muslim majority nations, and one could argue the Muslim religion, since no terrorist acts on US soil have been carried out by people from these seven countries. How does this protect Americans? Sounds like intolerance to me. The only logical explanation is racism. So is the Trump administration racist? Looks that way to me.

Militarism: Is Trump militaristic? He just signed an executive order to rebuild the military. You be the judge.

Dictatorship: Is Trump a dictator? He has signed several executive orders. These orders were not investigated by legal, policy, or political staff to ensure acceptability. An executive order is an official statement from the president about how the federal agencies he oversees are to use their resources. The president’s executive orders are recorded in the Federal Register and are considered binding, but they are subject to legal review. What this means is Trump is governing by decree; as if he had been elected dictator. One definition of a dictator is undemocratic rule. Close enough for me.

I think it is fair to say that some of the things Trump is doing draws parallels to the Nazis. Hitler was able to tap into the Germans’ frustration by blaming the Jews. He claimed the Jews were taking over the country by stealing high-paying jobs. He was able to animate the uneducated by saying that Jews were destroying Germany. Now compare that to what is happening now. The Trump “movement” claims that the Mexicans are stealing jobs and are responsible for much of their crime. He is also perpetrating the idea that Muslims are terrorists. Most of his support appears to come from the uneducated. The Vox article, Election Results 2016, reports, Trump won “on the basis of overwhelming support in rural areas, particularly among non-college-educated whites”

Now there are two ways to look at this mess. We could all be fearful and think the worst convincing ourselves that the beginnings of WWIII are happening. I refuse to believe that. It excites me that the actions of Trump appear to be “waking” the American people up. Perhaps this will force the United States to decide what type of a society they truly desire. Do they want a society based in fear, isolationism, individualism, and nationalism; a society that seems to have lost the of values “human dignity and respect.”  Or, do they want a society that cares about its citizens or even better all citizens; a society that values human dignity and a society that loves, cares and respects all people and not just their own. I like to think that Americans desire the latter and are waking up to the reality that Trump is creating the opposite of what American’s desire; a society built on fear, intolerance and perhaps even hate. The Huffington Post has an article called, The Inevitability of Impeachment, which states “Impeachment is gaining ground because it’s so horribly clear that Trump is unfit for office”. I sincerely hope they are right!

2 thoughts on “Should the World be Worried About Trump?”