A commentary about what bullying is. 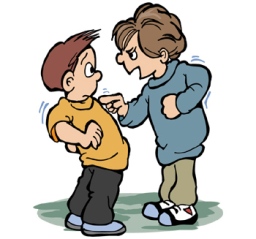 Adam Davies is a former member of Nova Scotia’s Chignecto-Central Regional School Board who writes commentaries. His editorial: Is the word bullying misunderstood? published in the Halifax, Nova Scotia’s (NS) Chronicle Herald asks the question: Is the word bullying maligned, misunderstood or meaningless? This is a valid question. If you google the definition of bullying on the Internet, you get 184 million hits. That is a lot of definitions, and they do vary greatly. Two people can witness the same incident, and one might say it was bullying (#antibullying, #bullying) and the other it was not. Why? Because each has a different definition of bullying.

Many of us know a textbook definition of the word, such as this from the provincial school code of conduct: ‘Bullying means behaviour, typically repeated, that is intended to cause or should be known to cause fear, intimidation, humiliation, exclusion, distress or other harm to another person’s body, feelings, self-esteem, reputation or property, and can be direct or indirect, and includes assisting or encouraging the behaviour in any way.’

However, he argues that definitions leave gaps. For example, Mr. Davies argues some bullying is dismissed as teasing or horseplay. “Clearly, bullying only means what we want it to mean,” he says. In his editorial, Mr. Davies refers to an incident that occurred in a NS High School. A CTV News report, Several students suspended after alleged assault at Cape Breton high school, describes the incident that Mr. Davies is referring to. It also has an edited video of the disturbing incident, which was a violent incident at the NS high school that was circulated on social media. It shows a grade 9 student being attacked by another student who literally throws the grade nine student across the locker room. The attacked student was hurt in the incident.

The author of the editorial argues that many news reports described the incident as an alleged assault but there were others who described it as bullying. Yahoo News’s headline, Assault caught on video at Cape Breton high school, calls it an assault, while the Halifax Chronicle Herald’s headline, Bullying incident in Coxheath shines light on complex issue, calls it bullying. So, the question is: Was it bullying or was it an assault? It’s both. An assault is a physical attack, and that clearly happened in the NS incident.

Before COVID-19, I (#blog, #blogger, #YA, #authors, #somseason) gave author talks for my book, A Shattered New Start. In that talk, I used a definition for bullying from Bullying Reporting and Prevention (BRIM), a company that develops Anti-Bullying Software. Their definition is designed for children, which is why I used it, and it says, “Bullying is when you keep picking on someone because you think you’re cooler, smarter, stronger or better than them.” Writing a post about the definition of bullying has made me realize even that definition is lacking. The Royal Canadian Mounted Police (RCMP) define bullying “as when there is an imbalance of power; where someone purposely and repeatedly says or does hurtful things to someone else.” Many definitions of bullying say to be bullying, it must happen more than once. The news reports fail to report whether the NS boy was repeatedly assaulted either physically (using your body or objects to cause harm), verbally (using words to hurt someone), or socially (using your friends and relationships to hurt someone). Based on my experience with school bullying, and using definitions like Oxford’s definition, “seek to harm, intimidate, or coerce someone perceived as vulnerable,” which makes no reference to repetition, the NS youth was definitely bullied.

Mr. Davies sites a 2019 research study on student well-being and experiences at school which was commissioned by the Nova Scotia Department of Education and Early Childhood Development. Their report, based on survey data from more than 54,000 students in Grades 4 to 12, did not use the terms bullying or bullying behaviour. Instead, students were asked if they felt unsafe or threatened at school within the past month. According to the survey, 19% of students felt unsafe or threatened at school, with 35% for students with physical disabilities, and 36% for those who identified as LGBTQ. The survey revealed that students were most worried about gossip, pranks and being left out by their friends and peers. Most disturbing to me was 61% of students surveyed reported feeling physically threatened and about half of those surveyed were concerned about cyber threats, including online gossip, hurtful messages and the spread of inappropriate photos.

The survey on student well-being and experiences at school reveals a lot of other things about school life, but the fact that 19%, or approximately one in five students, feel unsafe at school is alarming.

The Canadian Red Cross has a simple definition of bullying. It says, “bullying is a form of aggression where there is a power imbalance; the person doing the bullying has power over the person being victimized.” That is a good definition because it is simple, yet it encapsulates what bullying is. Perhaps there is an even a simpler definition of bullying? Maybe bullying should be defined as when a person is made to feel threatened or unsafe by another person. It’s simple, yet says what bullying is all about.

Bullying typically is defined by three elements: aggression, a power differential, and repetition. I have a problem with the repetition part. If a person feels threatened or unsafe, because of another person, even one time, then in my view, bullying has occurred. Under no circumstances should a person ever feel threatened or unsafe because of another individual. Many will argue that bullying is complex and you can’t define it as I just did, but perhaps that is the problem. Maybe we humans want to make everything more complicated than it has to be. To me it is simple. If a student, or anyone for that matter, feels unsafe or threatened by another, they are being bullied.

One thought on “Why do Things Have to be Complicated?”

learn how to be your own best resource