A commentary on helping others.

Since mid-July, Canadians, along with the world, have been shocked and frightened because of a nationwide manhunt for 19 year old Kam McLeod,  and 18 year old Bryer Schmegelsky, both from Port Alberni, British Columbia (B.C.).  The pair allegedly left on a trip to look for work in the Yukon. Initially, they were treated as missing persons after not checking in with relatives for several days, but as the days progressed, the men became suspects in the shooting deaths of a tourist couple in northern B.C.—Australian Lucas Fowler, 23, and American Chynna Deese, 24—who were found at the side of the Alaska Highway early in the morning on July 15. Then the two teens were charged with second-degree murder of a man whose body was found days later in B.C. The manhunt ended when the fugitive’s bodies were found in northern Manitoba. (see Bodies found in northern Manitoba)

Schmegelsky’s father informed the press that he fears his son, who had a troubled upbringing, is on a “suicide mission.” McLeod’s father described his son as “a kind, considerate, and caring young man” who has “always been concerned about other people’s feelings.”

I, like most Canadians, could not comprehend how two teens could carry out such a despicable act. I, like most people, wondered what went on in the head of these two young people. Did they give up hope because of these chaotic times? 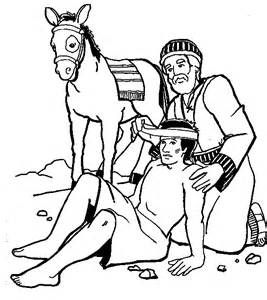 On the front page of one of our local papers was a headline, Good Samaritan unknowingly helps fugitives. The story was published in many papers, including the National Post, and is  titled, My big heart could have got me killed. The story is about a man who realized later that he had a potentially dangerous encounter when he unwittingly towed the SUV used by the fugitives out of the mud. At the time, the pair were considered missing, and not suspects or fugitives.

This story got me wondering: Should people be wary of being a good Samaritan? In case you are not familiar with the Christian scriptures, a ‘good Samaritan’ comes from the parable of the Good Samaritan, found in the Gospel of Luke.

The parable, summarized by Wikipedia, goes like this. It is about a Jewish traveler who is beaten, stripped of clothing, and left half dead alongside the road. First a priest and then a Levite comes by, but both avoid the man. Finally, a Samaritan happens upon the traveler. Samaritans and Jews despised each other, but the Samaritan helps the injured man. The full version of this parable can be read in Luke 10:25-37 of the Christian scriptures.

Ironically, last week my wife and I encountered a good Samaritan while we were camping at a campsite 20 minutes from our home. It was the first time we used our newly purchased trailer. As typical, the first time you use something new, you encounter glitches. Let me elaborate.

We were having problems figuring out how to use the furnace thermostat. Whenever the furnace came on, cold air blew out the ceiling vents. We could not figure out how to make the air blow out the floor heating vents only. While out walking one morning, my wife noticed a trailer the same make as ours, so she went and talked to the occupant, asking her if she knew how to operate the thermostat. The trailer was older than ours, so the heating system was different. She was unable to help, but she did say her husband was very handy, and would help when he got home from work.

We felt it was not important enough to bother him with our furnace issue, but about 9:15 pm that evening, all our lights went out. Now, I am the first to admit that I am not mechanically minded, so I had no idea what to do. We called our son, who also owns an RV, but he couldn’t really help without being with us. Not knowing what to do, in desperation, we went to the campsite that my wife went to earlier. This time her husband was home, and he did not hesitate to help us. He came to our trailer with his tools and determined that we had two burned out fuses. We never determined what caused them to burn out, but he replaced them with fuses he brought and thankfully, our lights worked again.

We offered to pay him for the fuses, but he declined. We offered to buy him a case of beer, but he refused that too. He told us to ‘pay it forward’. I do not know what we would have done if this ‘Good Samaritan’ hadn’t rescued us. My wife and I are so grateful that someone was able to solve our problem.

That brings us back to the question: Should people be wary of being a ‘Good Samaritan’? The man who helped us certainly wasn’t. He didn’t hesitate to. Yes, anytime you help a complete stranger, there is a risk, since you never know if he or she is someone intent on hurting you, or taking advantage of you, but those people are few and far between, in my opinion. Most people are good people.

“I don’t want to live in the kind of world where we don’t look out for each other. Not just the people that are close to us, but anybody who needs a helping hand. I can’t change the way anybody else thinks, or what they choose to do, but I can do my bit.”

Even though we live during a time in history where racist, anti-immigrant, homophobic, misogynist, and white Supremist rhetoric is rampant, I believe that we all must look after one another. I want to live in the same kind of world that Charles de Lint wants. After all, helping one person might not change the whole world, but it could change the world for one person. Perhaps this video says it best.

4 thoughts on “Should People be Wary of being a Good Samaritan?”