A commentary comparing the inauguration of President Trump to that of former President Obama.

I remember inauguration day eight years ago when Barack Obama was sworn in as the 44th president of the United States. It truly felt like history was made. “A New Birth of Freedom” served as the inaugural theme and there was a larger than usual celebrity attendance. In his inaugural speech President Obama talked about renewal, continuity and national unity. There was so much optimism and hope that day. The world rejoiced as the first African American president took office.

Now compare that to the inauguration of Donald Trump in 2017. There were only five notable celebrities who attended the Trump inauguration. Instead, many of the same celebrities who criticized Trump during his campaign attacked him on social media during his inauguration  The Atlantic described the inaugural address as “unusually dark and political, delivered in a forum where new presidents have tended to reach for a language of unity, positivity, and non-partisanship”. There lacked enthusiasm and a feeling of hope. Instead, many people appeared to have a cautious wait and see attitude. I personally felt some trepidation for the future when the 45th president was sworn in.

“He’s been scandal-free, frankly, in the White House. We haven’t had that what for a while. There have been some issues around his campaign, but they’ve not settled on him.”

I agree wholeheartedly with Mr. Brokaw. Obama’s presidency has been relatively scandal free. There were no wars fought during the eight years of the Obama administration. There were no marital affairs or scandalous words said by Mr. Obama. He tried to make life better for ordinary Americans with his Obamacare. There certainly were no personal scandals like those of Nixon or Clinton. When you Google scandals involving President Obama, all you find is controversies surrounding decisions made by his administration. These were controversies such as Benghazi, a terror attack in Benghazi, Libya which resulted in four Americans dying. The criticism is that help could have been sent, but wasn’t. It is argued that requests for security prior to the attack were repeatedly denied.  Then there was “Operation Fast and Furious” in which the Obama administration is accused of arming drug cartels south of the border as a means to undermine the Second Amendment. It doesn’t matter which president in history you look at you will find these kinds of scandals. 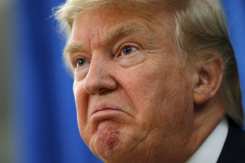 Now let’s compare the now President Donald Trump, who has only been president for a few days. The Atlantic provides a list of numerous scandals surrounding Donald Trump. There are numerous sexual-assault allegations with the most famous being the 2005 video, exposed during the campaign, in which the now president boasted about sexually assaulting women. On the infamous tape Trump brags about groping at women’s genitals. He says to Billy Bush of Access Hollywood, “And when you’re a star they let you do it.” There are scandals involving beauty pageants, racial discrimination allegations, the Trump University fiasco and even allegations of Mafia ties. The list of scandals goes on and on. It is unfair to put these two men into the same category.

Pew Research Center studies trends in U.S. politics and policy, global attitudes, and numerous other trends. In June 2016, the Center published, As Obama Years Draw to Close…, in which they reported that across the ten EU nations polled, an average of 77% have confidence in Obama to do the right thing in world affairs.  When asked about Trump, just 9% of Europeans trust he’ll do the right thing in world affairs. That is a stark difference.

What about the world’s opinion of the United States? Research conducted by the  Pew Research Center in 2016 shows 13 out of 15 countries surveyed have positive views of the United States. In many of these countries, notably France, Poland, Spain, the UK and Japan, favourable views of the U.S. have endured since 2009, when President Barack Obama first took office. The Los Angeles Times reports that in early 2007, when George W Bush was president, a mere 29% of those polled in 18 countries viewed the U.S. mainly as a force for good in the world. It seems former President Barack Obama did more for the reputation of the United States than his predecessor and based on world opinions of his successor, Donald Trump, it’s unlikely that that positive international reputation will remain.

Now let’s go back to the January 20, 2017 inauguration day. According to the article, Trump’s Inauguration.., about 250,000 people came out for Donald Trump inauguration. By comparison, 1.8 million people came out for Obama in 2009. There were no protests during Obama’s 2009 inauguration. Contrast that to the numerous protests which occurred in Washington DC, as well as other American cities, during Trump’s inauguration. Some of these protests turned violent causing police to use tear gas, water cannons, and pepper spray. Protests not only occurred in the United States, but around the world. According to The Guardian, protests occurred in London, Tokyo, Berlin, in the West Bank, the Philippians, Rome and even Russia. The Canadian Press reported protests in Montreal and Toronto. When I learn of these kinds world events, it does not give me confidence in this new president. I fear turbulent times may be ahead for our southern neighbours and perhaps the world.

The article, A nation of dissent, reports that demonstrations were held during George W Bush’s inauguration in 2001. Four years later, for Bush’s second inauguration, more than 1,000 protested the Iraq war. A difference is, these protests did not involve violence. There haven’t been violent protests during an inauguration since Richard Nixon. Burning miniature flags and stones were hurled at police during the inauguration of Richard Nixon in 1969 to protest the Vietnam War. We all know what happened to Nixon. In 1974, the House Judiciary Committee recommended Articles of Impeachment to the House of Representatives, but Nixon resigned before the House voted on the Articles. Could this be an omen for President Donald Trump?

2 thoughts on “What a difference eight years can make!”