I used to think Star Trek was just fantasy, but is it? 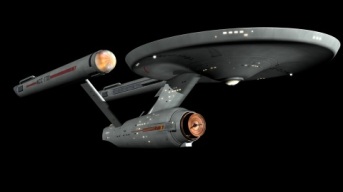 I am a Star Trek addict. I admit it. There are many of us out there. I have watched Star Trek since my college days when most of the dorm community would watch the original Star Trek series before going for our evening meal. Ever since, I have continued to watch the various series such as Star Trek: The Next Generation, Voyager, Star Trek: Enterprise and even Deep Space Nine. I anxiously await the new series premiering in 2017. What attracted me to Star Trek, even though I understood that it is science fiction, is the technologies used on the voyages and ideas put forth by the various episodes seem possible. I have always been intrigued by such ideas as transporters, which convert a person or object into an energy pattern and then “beams” it to a target, where it is reconverted into matter. Especially intriguing to me are the concepts of time travel, the space-time continuum, and the idea that multiple dimensions or universes exist. What I find especially fascinating is that science, especially quantum physics, is now providing credible evidence that notions such as time travel and multiple universes may actually exist.

In the Star Trek: The Next Generation series there is an episode called Parallels where the Enterprise returns to the location of the fissure, attempting to return Worf to his original universe. A Bajoran ship, which causes the fissure to destabilize and the various realities to merge, then attacks the Enterprise resulting in over 285,000 Enterprises appearing in the same area of space. The android, Data determines that the way to restore the realities is to send Worf by shuttlecraft to the Enterprise of his universe, passing through the fissure and using the shuttlecraft’s engines to close it. Worf safely passes through the fissure, finding himself back in normality with a single Enterprise in front of him. After boarding, Worf finds that no time has passed since he initially entered the fissure. When he returns to his room expecting a surprise party, he finds only Troi, the ships counsellor, waiting with the knowing that the two are married in many alternate universes.

According to the article, Will we ever have a Theory of Everything, on bbc.com’s Earth page, our universe is one of many. This huge collection of universes is referred to as the “multiverse”. The article describes it this way.

“At the beginning of time, the multiverse was like ‘a great foam of bubbles’, all slightly different shapes and sizes. Each bubble then expanded into its own universe. We’re in just one of those bubbles,” says Barrow of the University of Cambridge in the UK. As the bubbles expand, other bubbles can arise inside them, each one a new universe. “It’s making the geography of the universe really complicated.” Within each bubble universe, the same physical laws will apply. That’s why everything in our universe seems to behave the same. But the rules will be different in other universes. “The laws we see in our universe are just like bylaws,” says Barrow. “They govern our bit, but not all of the universes”…There are trillions of other universes, each one unique.

It seems that many theorize that multiple universes or dimensions, like the one put forth in the Star Trek episode, Parallels, may indeed be reality. Who knew?

Without getting into the detailed plots, there are two Star Trek movies built on the theme of time travel. The first is the movie Star Trek IV, the crew of the Enterprise must travel back in time to get whales in order to save the future of Earth. In the movie Star Trek: First Contact, the Borg make a second attempt to conquer the Federation. Captain Picard and the crew of the USS Enterprise follow the Borg three hundred years into the past when Zefram Cochrane is preparing to launch Humanity’s first warp-capable engine.

What is fascinating is the world of quantum physics, specifically the Quantum Entanglement theory, strongly proposes that time is an illusion; that time does not exist. Time in reality is a human creation. Experiments have been done where two particles (photons or electrons) A and B are paired, then separated, and placed in different locations. When particle A is stimulated, particle B reacts without any time delay. That means that both particles act at the same moment in time regardless of distance. This provides evidence that time does not exist, at the fundamental level. Our concept of time as a linear passage of events is perhaps wrong. All there is, is now. Everything exists in an ever-present moment.

Albert Einstein, known for his brilliant mind in science, wrote a letter to his close friend’s family, that is, Michele Besso’s family, saying that although Besso had preceded him in death it was of no consequence, “…for us physicists believe the separation between past, present, and future is only an illusion, although a convincing one.” Even Stephen Hawking, one of the most brilliant minds alive today, is now saying time travel is possible. In a lecture titled, Space and Time Warps, he says, “The conclusion of this lecture is that rapid space-travel, or travel back in time, can’t be ruled out, according to our present understanding.” So it seems that science is suggesting that time travel may be possible. 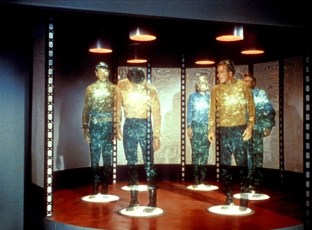 Even transporters may be possible, according to Quantum Physics. In May of 2014, The New York Times reported that scientists have achieved Quantum teleportation. This involves transferring so-called quantum information, or what is known as the spin state of an electron, from one place to another without moving the physical matter to which the information is attached.

Now this is a long way from transport machines on star ships, but it does lend itself to the possibility that it may one day be reality. There is no question that some of the things quantum physics are doing is mind blowing. In fact Niels Bohr who received the Nobel Prize in Physics in 1922 once said, “If quantum mechanics hasn’t profoundly shocked you, you haven’t understood it yet. Everything we call real is made of things that cannot be regarded as real.” I must say some of the things that are being discovered in quantum physics does shock me, and I don’t pretend to fully understand it.

So what is my point? What science seems to be telling us is that our world and our universe is much more complicated than what we’ve been taught. We humans like to get comfortable in our “little boxes” where we’ve been programmed to believe that things are a certain way. We resist any ideas or thoughts that oppose our conceptions of reality. We humans even go to great extremes to defend our beliefs about reality. It amazes me that there are still people who believe and set out to prove that the earth is flat. If you don’t believe, check out the Flat Earth Society website.

Maybe it’s time to open up our minds to the possibility that things may not be the way we think. One thing I’ve learned in my many years of life is that things are never as they seem. Actually, the poet W. H. Auden, says it better. “There’s always another story. There’s more than meets the eye.” There is always much more going on than we like to admit or even desire to know. Maybe science fiction is not so fiction after all.