A commentary on the increase in “hate crimes” due to political rhetoric. 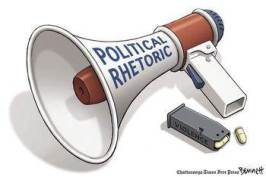 I am deeply disturbed by some of the events occurring in my beloved country of Canada. I have always been proud of the fact that Canada celebrates cultural diversity. Multiculturalism in Canada is the sense of an equal celebration of racial, religious and cultural backgrounds.  The Canadian federal government, under then Prime Minister Pierre Elliott Trudeau, put forth the ideology of multiculturalism which places emphasis on the social importance of immigration. The Canadian Multiculturalism Act is a law that was passed in 1988 and it aims to preserve and enhance multiculturalism in Canada. When I taught high school social studies I always proudly emphasized this fact to my students. So, when I learn of islamophobia, anti-Semitism, and anti-immigration views expressed in my country, I am alarmed and angered. These are some of the things that have happened in Canada.

In early March, Montreal police arrested a 47-year-old man hours after a bomb threat targeting Muslim students forced the evacuation of three buildings at Concordia University’s downtown campus. Apparently, several media outlets in Montreal received a bomb threat claiming to be from the “Council of Concerned Citizens of Canada,” a white supremacist organization also known as C4, which claimed that “small […] amateur explosive devices” had been placed in two buildings on the University. The email stated that C4’s goal was to injure Muslim students. The email also began by citing the election of U.S. President Donald Trump as inspiration for the group’s violent agenda (see CBC News).

The Globe and Mail is reporting that police are investigating the discovery of swastikas inside an Ontario university classroom this week which left some students feeling distraught; the school calling the symbols “hate graffiti”. The news report says the police are treating the incident as a case of mischief at the time of the article. Marc Newburgh, CEO of Hillel Ontario told reporters, “This incident is an unfortunate reminder that anti-Semitism continues to persist even in a society as welcoming as Canada and a city as diverse as Toronto.” Hillel Ontario is an organization that strives to enrich the lives of Jewish students attending Ontario’s colleges and universities (see Globe & Mail). Sure seems like a hate crime to me.

Far right groups opposed to a federal government motion condemning Islamophobia took to the streets of Montreal in early March. On the opposing side were around 100 representatives of anti-fascist groups, carrying signs saying “Make racists afraid again” and chanting “Immigrants in, fascists out.” Tensions between the groups quickly flared despite a police presence (see CBC News).

Then there was the Quebec City Mosque attack that occurred on January 29th. Alexandre Bissonnette, only 27, was charged with six counts of first-degree murder and five counts of attempted murder while using a restricted firearm. During that attack, six men died in the shooting while evening prayers were underway at the Centre Culturel Islamique de Québec (Islamic cultural centre of Quebec) [see CBC News].

A Winnipeg business owner who identifies herself as a witch says her store has been repeatedly vandalized over the past six years and she wants police to investigate the incidents as hate crimes. Dominique Smith owns Elemental Book & Curiosity Shop Inc. Smith sells alternative spirituality products such as herbs, crystals, incense, books and tarot cards. She also teaches classes out of the business and occasionally has gatherings for worship and rituals. She says her shop’s window has been broken three times. She has had people come into the store harassing her and her staff, telling them that we were evil and needed to repent. Ms. Smith says she’s had to clean spit and urine off of her door and windows countless times over the past few years (see CBC News).

Now I ask the question: what has happened to “tolerance and understanding”? Why does it appear to be disappearing? Don’t get me wrong. I’m not that naive. Canada has always had its share of racists and bigots, but for the most part my country is seen as a tolerant, multicultural society. In fact, analysts at the London-based think tank, the Legatum Institute, ranks 142 countries based on their economy, entrepreneurship and opportunity, governance, education, health, safety and security, personal freedom and social capital.  In 2015, the Institute ranked Canada as number one for being the “freest country in the world” with its tolerance of immigrants, minorities, freedom of expression and beliefs. In fact, an overwhelming percentage of Canadians (92 %) agreed that their country is a good place for immigrants. The United States was ranked 15th for personal freedom (see CTV News).  In 2016, Canada dropped to second place and the United States dropped to position 26 in terms of personal freedom. (see Legatum 2016).

Canada is predominantly a Christian country. In the 2011 National Household Survey, two-thirds of Canada’s population reported affiliation with a Christian religion. Christianity is a religion that follows the teachings of Jesus whose teachings focus on the themes of love of God and love of neighbour. In fact, Matthew 22:36 – 40 in the Christian scriptures says, ‘Teacher [Jesus], which commandment in the law is the greatest?’ He [Jesus] said to him,” You shall love the Lord your God with all your heart, and with all your soul, and with all your mind.” This is the greatest and first commandment. And a second is like it: “You shall love your neighbour as yourself.” On these two commandments hang all the law and the prophets.’ If Christians believe this, then I do not understand why Canadians (at least some of them) are becoming (maybe they’ve always been so) increasingly intolerant and bigoted. At least this is what the various news articles are suggesting is the trend. It just doesn’t fit with the teachings of Jesus.

Sadly, this trend seems to have begun when the US presidential campaign began and much anti-immigration, anti-Muslim and anti-Mexico rhetoric began filtering into Canada’s news. Middle East Eye, an online news organization that provides news from a Middle Eastern perspective, reports that Donald Trump’s election victory is causing a ‘spill-over effect’ in Canada, where hate-motivated incidents have seen a recent spike (see MEE). Even some of our Canadian politicians are now spewing toxic, divisive rhetoric. I truly thought Canadians were different; that Canadians were more tolerant because of our multicultural diversity.  In fact, our Prime Minister, Justin Trudeau, during an address in London, United Kingdom, in November of 2015 said, “Diversity is our strength.” Now I always thought so, but perhaps I’m just naive.  It was Pierre Bayle, a French philosopher, who once said, “It is thus tolerance that is the source of peace, and intolerance that is the source of disorder and squabbling”. He is so right! I still choose to believe that the majority of Canadians are tolerant and welcoming people no matter what race, religion and belief a person may have. The individuals carrying out these despicable hate crimes act out of fear perpetrated by rhetoric. Publius Cornelius Tacitus, a senator and an historian of the Roman Empire, once said, “Fear is not in the habit of speaking truth.” People are acting out of fear and thus executing heinous, hateful, acts because of lies spread by toxic political rhetoric. This has to stop!