Every summer since 2002, starting when my son was 8 years old, my son and I have taken hiking excursions to the Canadian Rockies. Traditionally, we go with my brother-in-law and his two sons. Sometimes my brother and his son would join us as well as a friend and his two sons at the beginning. These excursions entail carrying 40-pound backpacks containing food and cooking equipment, sleeping gear and a tent. On some occasions we carried our 40-pound packs 14 kilometres (8.7 miles) before reaching our destination.

Most hikes were to the backcountry, a remote undeveloped rural area accessible only by hiking trails. We would hike to places such as Landslide Lake, Ribbon Lake, Lillian Lake, Utopia Creek, Glacier Lake, and Celestine Lake to name a few. I realize that these names likely don’t mean much to many of you but I can assure you that these settings are some of the most breath-taking, beautiful scenery in the world.

We’ve had some adventures over the years. In what is called Kananaskis Country, we did a day hike to Ribbon Falls after a good night’s rest at the Ribbon Lake campground. To reach our destination, we had to maneuver down a vertical cliff. Thankfully, there were chains attached to help a person propel downward. By carefully finding footholds and hanging onto the chains we successfully got to the bottom part of the cliff. Being that I am afraid of heights, this was a terrifying experience for me. Climbing up the cliff was much easier.

After hiking the Galatea Creek Trail, also in Kananaskis Country, and arriving at our destination of Lillian Lake we put our backpacks down and went to scout out a site to set up our tents. Several minutes went by before we returned to collect our equipment to take to our chosen site. To our dismay, we discovered a chipmunk chewing its way through the top of my son’s brand new pack which I had just purchased for my son. In fact, this was his first trip with it. The chipmunk had chewed a hole into the top of the pack in an attempt to get at the trail mix inside. I was not happy with that animal and yelled some choice words at the creature. Thankfully the little beast was not successful in retrieving any of the trail mix.

One of the most difficult hikes we’ve done was to Geraldine Lakes in Jasper National Park. It involved a very steep climb beside the waterfalls between Lower and Upper Geraldine Lakes where you come to kilometres of boulder hopping across what is called talus field. To say it was exhausting hopping from boulder to boulder carrying a 40 pound backpack is an understatement. At one point I was feeling sorry for myself asking, “Why am I doing this?” Thinking that I was getting too old for this hiking business (I was in my 40s), we came upon a fellow hiker in his 70s. He told us that Geraldine Lakes was one of his favourite trails and that he had hiked the trail many times. I needed an attitude adjustment at that point and my outlook changed after talking to the senior hiker. If a 70-year-old man can hike that trail, I had nothing to complain about being I was 30 years younger than this man. It’s all about your mental attitude. Being in shape, of course, helps.

One of my favourite hiking experiences was our hike to Utopia Creek in Jasper National Park. There were eleven of us on that expedition. On the Saturday evening we decided to take a different trail back so that we could climb up to what is called the Sulphur Skyline, which has some of the most breathtaking panoramas in Jasper National Park. This meant hiking the Fiddle River 11 kilometre horse trail from our campsite, then going up a 700 metre (2300 feet)  elevation gain of about 2 kilometres (1.2 miles) to reach the skyline. The trailhead had a sign saying, “Trail not recommended,”  but this didn’t stop us. What we did not realize is that we had the cross the Fiddle River not once, not twice but six times.

On our first crossing we carefully hopped across the river from boulder to boulder with our backpacks on until the last bit whereby we took our packs off, tossed them a fair distance to another person on the riverbank and then hopped onto the bank ourselves. Thankfully no one fell into the water and our packs remained dry.

During the second crossing we decided to take our hiking boots off, put on our sandals and cross the river in our sandals. The current was strong and the glacier water literally made my feet hurt.

Now the third crossing was done in our bare feet. By this time the ritual of taking off our boots was becoming burdensome, so when we had to cross the river on the fourth, fifth and sixth occasion we just kept our boots on. The current was strong so there were times when I had to hang onto my son, age 12 at the time, to prevent him from being swept downstream by the current. We stopped at a trailhead leading to Mystery Lake to ring out our wet socks and dried our boots as best we could. We eventually made it to the Sulphur Skyline with one of the most spectacular views I have ever had the privilege to appreciate. The chipmunks on top of the skyline were brave creatures as they would come right up to your fingertips looking for food.

In 2009, nine of us spent three hours hiking the 7 kilometre (4.3 mile) trail to Celestine Lake in Jasper National Park. A friend of mine and I were the last to arrive at our campsite as the younger ones of the group were much quicker than us older ones. What made this adventure so memorable was the fact that when my friend and I arrived at the campsite, we were told that we had to go back as there was a forest fire nearby. Now we didn’t believe them, of course, until we saw the warden’s helicopter take off. Apparently, the park warden arrived in a chopper and called to my brother in law saying, “I have some bad news guys. You have to leave as there is a fire in the area.” So it turned out that we were told the truth. We had to spend the next three hours returning to our starting point. 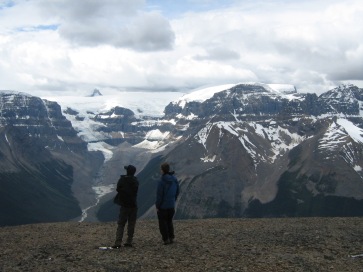 Now I have been asked over the years why I would go into the back country where there is no contact with the outside world; where there are bears and cougars and it can sometimes get to below freezing at nights. Those are good questions. My first response to those questions is always that it is quality time with my son. But it is more than that. I do it for the adventures. There is nothing like being in nature and the experience of standing on top of mountain with the wind blowing through your hair. The beauty that Mother Nature has to offer is far-fetched until you see it, and even then it can be surreal. For me, being in the wilderness is a chance to touch the divine. It is during those times that I feel closest to God or the Universe.

According to the article, How Does Nature Impact our Wellbeing, put out by the University of Minnesota,

“Being in nature, or even viewing scenes of nature, reduces anger, fear, and stress and increases pleasant feelings. Exposure to nature not only makes you feel better emotionally, it contributes to your physical wellbeing, reducing blood pressure, heart rate, muscle tension, and the production of stress hormones. It may even reduce mortality, according to scientists such as public health researchers Stamatakis and Mitchell.”

Maybe that’s why I do it. Without knowing why, it made me feel better. So, go out into nature and reduce your stress. Speaking from experience it works. It is so easy to get so wrapped up in our daily urban lives that we forget what nature has to offer. Visit Mother Nature to de-stress. When you do you will discover that she is worth protecting.